The Secret is Out! 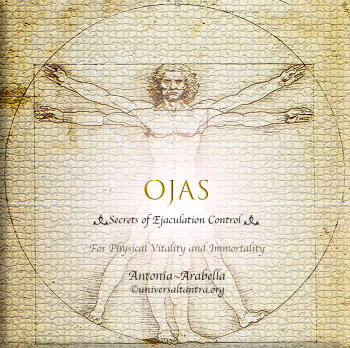 The Secret is Out!

I am pleased to announce that my latest eBook, “Ojas-Secrets of Ejaculation Control” is now available for download on my Store Page. This is a comprehensive and practical handbook for those who experience this condition. But you don’t necessarily have to suffer from erectile disfunction or premature ejaculation to derive benefits from this book. I would prefer to think of this as a guide book for men’s sexual health as the tips and techniques described in this book can serve all of those who wish to increase theirs or their partner’s stamina.

The term “Ojas” is a Sanskrit word that describes the balancing of our Essence for health and spiritual growth. Learning how to balance these energetic essences will result in boundless mental clarity and vitality that will unlock the keys to immortality. The techniques and practices in this book will show the reader how to safely re-harvest their energy through an easy to learn and fun to do daily practice. By performing these exercises along with some simple lifestyle adjustments anyone can achieve “Ojas”.

Here’s what the readers have to say about “Ojas”:

“Wow! What an eye opener! Thank you so much for this book.
The techniques are easy to learn and fun to practice. A+!”
– R. Prud’homme New Orleans, Louisiana

“My Partner and I would like to thank you for your efforts.
This book had a positive impact to our intimacy”
– K. Pernet, Toronto, Canada

“All my life I had struggled with this condition. I was at a loss for what to do until I found this book. Thanks”
– G. Martinez, Seattle, WA

“Although ED and PE are not a problem for me, the advice in this book will be helpful to those who wish to enhance their sexual health.”
– Jijo A., Dubai, UAE

Categories: The Secret is Out!

If I had a dollar for every time some one asked: “What exactly IS Tantra Massage?”, I would achieve a type of financial nirvana that would even make the Sultan of Brunei blush. But alas, it appears that the fickle finger of fate is too busy picking its nose. So I must instead lift the veil of mystery surrounding this often time misunderstood practice.

Now, couple this with the benefits of Tantra: balancing energies, more stamina & endurance, clarity of thought, deepening of relationships, emotional healing, spiritual awakening, releasing past trauma, etc. Now you are in whole other dimension. One that combines both physical and emotional wholeness.

By practicing the time tested Tantric techniques of Kriya Asanas followed by Pranic Breathing, the individual opens the energetic channels of the body known as Ida and Pingala. The aforementioned techniques work with both the physical and subtle aspects of the bodies to create what is known as the Shushumna Channel. According to Dr. Harish Johari in his book “Tools for Tantra”, in order to create this Middle Pillar channel, both Ida and Pingala must be balanced.

At this point the physical body is ready to receive the benefits of the massage and will reap these benefits more effectively since the balanced energy is flowing unencumbered though the body. Tapping along the Ida & Pingala channels helps to continue moving the energy and the recipient may experience some tingling throughout the body. This can also be enhanced with sound and/or aromatherapy to to help clear the Chakras and to enhance that feeling of blissful relaxation. Oh yes, and let’s not forget massaging the Sacred Spot! As one very happy client said to me at the conclusion of his session: “I feel both energized and relaxed!”

Learn how to share the sensual secrets of Tantra Massage with my popular ebook: “Tantra Massage for Lovers”, available through my web store:

Looking forward to hearing from you!

What do Lord Byron, Christopher Reeves and John Dillinger have in common?

Angel Lust is also referred to as a “Death Erection”, an involuntary response that occurs at the time of death, particularly if that death was a violent one, although it’s not always the case. Some men who have died with this condition were: Lord Byron, Christopher Reeves and John Dillinger.  There was also a reference to this in the book/film “The World According to Garp”, when T.S. Garp finds out from his mother that his father was a comatose man with a terminal erection who was mounted by his mother. After she had her way with him, his last dying words according to her were: ‘good’. Then he died!

But let’s switch from this depressing subject to one that is more enlightening. That being Death. WHAT?! You say? Dear Reader, before you get your panties in a knot or worse still, unsubscribe from this blog. Just hear me out. Read this with no judgement.

The French call ejaculation ‘Le Petit Mort’, ‘The Little Death’. That’s because every time a man ejaculates in the conventional manner they do experience a form of Death 2.0. The erection represents a desire to spread their seed before exiting this plane of existence permanently and at the moment of ejaculation, all functions stop for a plot second. A bit like a sneeze. Just like flowers will increase their pollen production before withering away, we want to make sure that we leave a lasting imprint on this earth.

Women also experience a similar phenomenon at the time of death such as expulsion of blood or fluids form the vagina. But let’s face it, a dead guy with a giant boner is defiantly more spectacular and attention grabbing.

Understanding the cause and effect of this function can also help us to raise consciousness and awareness as it relates to the relation between our Mind, Body and Spirit. If we understand that our energies are cyclical, that they ebb and flow as a result of a multitude of variables. Then it’s easier for us to harness and re-harvest this energy in a safe and efficient manner.

Through the practice of Tantra it’s possible to allow this energy to flow unencumbered while at the same time giving the person better clarity of thought and more stamina. That’s because these techniques not only work with the endocrine system of your body, but also your Mind and Spirit. After all, the are all interconnected!

Many men, in particular younger ones, are constantly plagued by sexual thought that can cause unnecessary distractions during the course of the day. They find that if they self pleasure themselves or engage in sexual activity upon waking, that they can experience higher levels of concentration and more productivity during the course of the day. This is only a half measure. By practicing techniques such as the Kriya Asanas, Pranic Breathing and The Orgasmic Meditation©, it’s possible for them to be in better control of their faculties, thus elevating them to a state of Higher Consciousness.

This Wholeness will help to unite and balance our polarities, allowing us to experience a healthy detachment that make us the observer in this journey through life’s transitions and preparing us for the inevitability of the final transition of life.